Pesticide Use: Toxic Past, Organic Future

Over the years, a movement has been growing in organic textiles. One that rejects the need for excessive use of chemical pesticides. But, many might ask why products such as cotton, wool, or even rubber would ever need to be grown using organic practices. They won’t be eating the blanket or mattress these raw materials make, so what does it matter if a crop duster flew low over the field it came 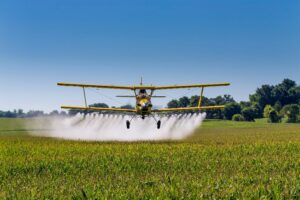 from? Well, as it turns out, it actually matters a lot.

Chemical pesticides are a core aspect of modern industrialized agriculture. In the US alone, our farmland is doused in a combined 2.5 million tons of pesticides annually. Cotton in particular is a pesticide-heavy crop. Mites, aphids, and various other insects make quite the feast of cotton, leading farmers to often overuse insecticides to save their crop. As a result, despite cotton fields taking up only 2.5% of the Earth’s farmland, cotton production uses 16% of the world’s total insecticide in a given year. That’s a steep increase from years past. And pesticide use in wool and rubber production has also increased year over year. So how did we get here?

Let’s take it way back to the beginning of agriculture as we know it. It can be assumed that humans have been finding clever and unique ways of dealing with pests since the first time someone put a seed in the ground. The earliest evidence we have of agricultural pest control comes from 4,500 years ago in Mesopotamia, where ancient Sumerians spread elemental sulfur on their crops. The Rigveda, a 4,000-year-old text, makes mention of a strategy of placing poisonous plants in and around crops to keep out insects. Chinese farmers by 1200 BC were mixing their own chemical compounds and employing predatory ants in their citrus groves. The ancient Greeks would not only chase locust storms to the sea with torches on foot, but also spread wood ash on cropland as an insect deterrent.

By the middle ages, new chemical methods had been developed. Because everything in that era was hardcore, medieval Europeans commonly used arsenic, lead, and mercury as pesticides. In the centuries after, various other chemicals like nicotine sulfate and pyrethrum would be synthesized for use as pesticide. However, arsenic remained the primary pesticide used by farmers until the 1950s.

The 19th century saw all kinds of advancements in chemical synthesis. In 1874, Austrian chemist Othmar Ziedler synthesized the chemical dichlorodiphenyltrichloroethane, which from now on we can thankfully refer to simply as DDT. It was not until 1939, though, that Swiss chemist Paul Hermann Muller would discover the insecticidal effects of DDT, at which point its use became widespread.

The initial use of DDT was to reduce cases of malaria and yellow fever, two diseases spread mostly by mosquitos. The US military funded extensive development into the production of chlorinates like DDT to fight back against disease in the Pacific Theater of WWII and to ensure larger harvests domestically. DDT was used all throughout the US after the war, but soon caught the attention of marine biologist Rachel Carson.

Silent Spring was published in 1962, and presents Carson’s argument that pesticides like DDT were having negative health effects on more than just the pests they targeted. In the book, she states pesticides should be more accurately described as simply biocides, as they rarely discriminate with what living things they affect. It was discovered that DDT, like many pesticides, is water soluble, meaning it can enter the water cycle and eventually make its way to people.

Over time, DDT builds up in the fat stores of living organisms. This is a problem because DDT is an endocrine disruptor. In other words, DDT messes with hormone production, potentially causing immunological, neurological, or reproductive issues. Mothers with high levels of DDT in their bloodstream are more likely to give birth to children with birth defects or developmental disorders. DDT is also very likely carcinogenic, considered a risk factor in pancreatic, liver, and breast cancer.

Rachel Carson’s work on Silent Spring eventually led to widespread public outcry to ban the insecticide. But there are still many more pesticides in use today. Triazines, a classification of herbicide, are used extensively in industrial cotton production and have much the same endocrine disrupting properties as chlorinates like DDT. So while Carson’s work resulted in the banning of a deeply damaging chemical compound, there are still dangerous chemical compounds in use today including the descendents of DDT. We’ve made some strides in protecting public health from the damage of chemical pesticides, but maybe there’s more we can do. And negative health effects in humans aren’t the only ways in which pesticides can be damaging. It shouldn’t be forgotten that wildlife and plants are also affected by the runoff of industrial pesticides.

As responsible consumers, we should demand better from the products we buy. We shouldn’t assume simply because we won’t be eating the product that it shouldn’t be made with consideration for public health. Cotton production uses a huge amount of pesticides, but it doesn’t have to. Sheep don’t have to graze on chemically treated fields. Rubber plantations can find new, environmentally safe ways to treat their trees. Making the choice to buy organic products, including organic mattresses and organic bedding, means sending the message that you will not support environmentally unsafe practices or products that sacrifice public health for profit.