History of the Organic Blanket

Everyone loves a good blanket. Warm, soft, and a 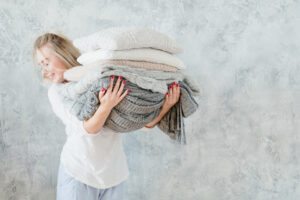 comforting reminder of childhood, there’s ample reason why their use is so widespread. Not to mention, it is an ingenious design. By trapping our body heat, the blanket is able to keep us warm once our internal temperature drops during deep sleep.  Psychologically, the softness of the blanket has a role in conditioning us to feel safe when drifting off, so we’ll have a more restful sleep. Thousands of different kinds of blankets pepper the market, from polyester blankets to organic blankets, from wool to cotton. Whatever kind you like, there’s plenty to choose from.

But in recent years, blanket manufacturing has changed. While “organic blankets” have become highly sought after in recent years, it is important to note that before the use of insecticides and synthetic fabrics, every blanket was an organic blanket. No other kind of blanket existed. Only in the last hundred years has it become necessary to specify whether a blanket is or isn’t made from organic materials. But because of the proliferation of pesticides and polyester, the vast majority of products on the market today are not organic. So if all blankets were once organic, when did things change? And where did the blanket even come from? 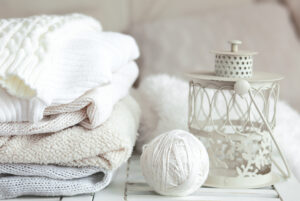 Initially, the word described a small undyed woolen cloth. It was only after the invention of a heavily napped woolen weave in 1339 by a Flemish weaver named Thomas that “blanket” took on the meaning we have now. Not much else is known about Thomas, other than that he apparently took on the last name Blanket (Blanquette) after developing this weave. This is perhaps the only time in history that an inventor was named after their invention and not the other way around.

Thomas Blanket, however, did not invent the blanket. He simply designed a prolific kind of weave and popularized a name for it. Types of products like blankets have existed for millenia. The earliest record of blankets comes from the Atharvaveda, the fourth book of the Hindu Vedas. This text, likely written around 1000 BCE, uses the word “kambala” as a generic term for shawls and blankets. Later, the 7th-century Chinese traveler Xuanzang would use the term in his journal to describe a fabric made from goat or sheep hair. The Sanskrit meaning of the term is “a woolen blanket.” Even in Europe, it is thought that the Vikings were snuggling up in blankets on the journey over to pillage the British Isles more than 300 years before Thomas Blanket got his name. Cultures all across the globe, even in tropical climates, have used blankets to help themselves sleep all throughout history.

It might be an unsatisfying answer to the question, but like many cornerstone inventions of the modern world, the blanket has no single inventor. Instead, the concept has floated around between cultures, iterating on itself for hundreds of years until it became what we now call a blanket. But as old and universal as the blanket is, there have been times and places where blankets were considered a luxury.

Up until advancements in textile manufacturing in the late Middle Ages in Europe, if a peasant wanted a blanket, they’d have to make it by hand. And when most of your day is spent trying not to die from starvation, plague, or an invading army, there’s just not a lot of time or energy left to sit down and stitch a blanket. There wasn’t usually a village blanket-weaver, and if there was, the vast majority of the peasantry wouldn’t even have the money necessary to buy one of them. The time and resource investment into coziness just wasn’t worth it at the time for most people.

Between then and now, the process by which blankets are made became streamlined and industrialized. Mass textile manufacturing made blankets more widely available. But the cost of the raw materials necessary in the production of blankets was still expensive. Industrialized agricultural practices, chief amongst them the use of pesticides, significantly lowered the cost of cotton starting around the 1930s. Soon, these practices would become standard for all crops. The further invention of synthetic fabrics like polyester made the process of textile manufacturing even more cost effective. Soon, blankets were all over, not just in bedrooms, but all over the home, and were even reimagined into clothing, like the Snuggie. 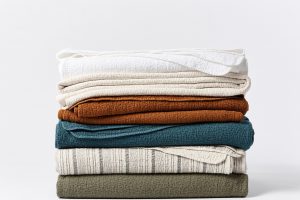 All this advancement in the efficiency of blanket production has come with other costs. The production and use of pesticides, dyes, and petroleum cause environmental damage and potentially expose the product to harmful toxins. And products of this kind are not always quality, made fast and without care. This is why when certifying whether a product is organic, great care is taken to ensure authenticity. Although this comes at a premium, it is assured that the product is free from toxins and environmentally safe. And the organic blankets at the Natural Sleep Store are no different. All our organic blankets are made from certified 100% organic cotton or wool and come in a variety of weaves, patterns, and colors so that no matter your blanket preference, you know you’re getting a natural, quality product.